A Brief Chronology of Wollongong High School of the Performing Arts

Wollongong High School of the Performing Arts is a specialist co-educational, government secondary school offering exceptional educational opportunities to students across the Illawarra for almost one hundred years. It has the twin goals of academic excellence and excellence in the performing arts.

Wollongong High School was founded in December 1916 at the Smith's Hill location after much pressure and lobbying from the local district citizens' association and the municipal council to the government. It was officially opened by the minister for education, Mr James. It was built with six classrooms, a science room, a manual training room, a library and some offices. There was no electricity and the students had to use pan toilets in a shed. Founding headmaster Mr Frank McMullen opened the school for the first day of term on 29th January 1917, with 140 enrolled students.

In 1916, the school motto 'Age Quid Agas' was changed in 1918 when it was realised that the translation meant 'what on earth are you doing?' or 'what are you doing?.' It was changed to 'Age Quod Agis', meaning 'whatever you do, do well'.

The school colours were originally black and white, and because of a clash with another school, were changed to black, white and emerald green. After the colour change the idea of using the colours to represent the two major industries in the district at the time – coalmining and dairying.

The original badge consisted of a white shield with a diagonal black band with W.H.S. written on it. The shield had the stars of the Southern cross in it in black, with the motto written underneath the shield. From 1919 to 1966, the Wollongong lighthouse and the new colours were introduced, plus the additional modification of the Latin motto. The exact year that the branches were added to the motto underneath the shield isn't evident. 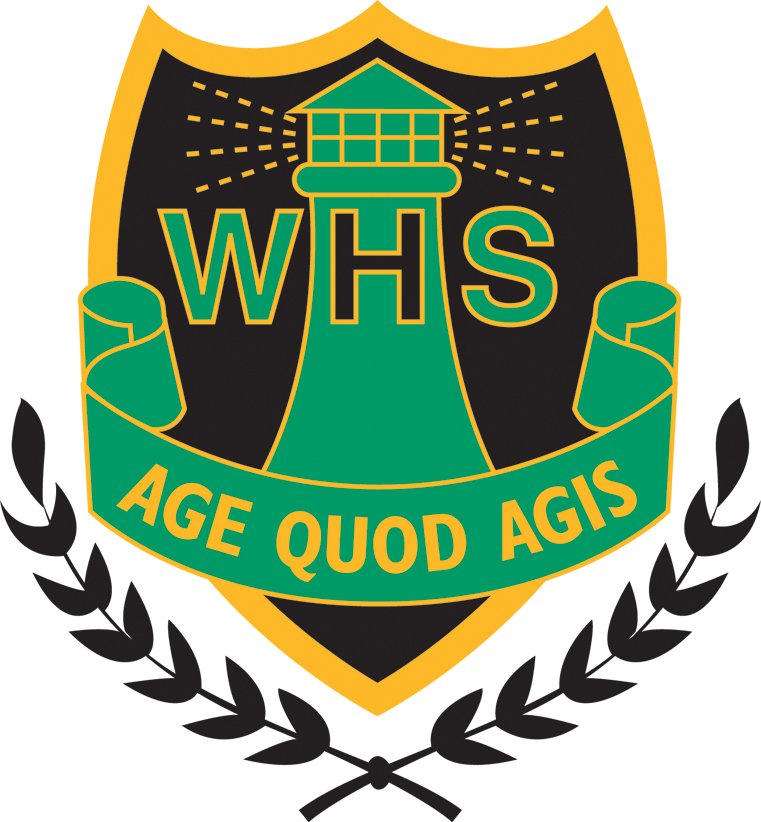 The school song was set to music by Mr R.W. Caldwell when he was Deputy Headmaster during 1949-1950. It was set to a traditional German drinking song, 'Trink Trink Brudrelein Trink', which was composed by Wilhelm Lindemann.

1918 - a permanent tuck shop was set up to raise money for school funds. Third year girls served, first years washed up and a morning tea tray was even provided to staff.

1918 – sports were tennis and lifesaving and the first athletics carnival was held. Many of the competitive sports were difficult for years because of the distance to other high schools.

1920 - a telephone was installed and also a gas supply for the science rooms.

1922 - the first school magazine ‘Gleam' was published with the lighthouse as it's inspiration.

1929 - the school dux Jack Somerville topped the state in physics, and eventually became Professor of physics at University of New England

1930 - 470 students were enrolled due to the increase in families moving to the district to work at the steelworks. Pupils came from as far away as Nowra, so there were about 30 boarding in town.

1935 - Two wooden portables were installed to cater for the larger numbers as they couldn't afford new buildings.

1935 – Although the school originally had a library built, it had always been used as a classroom, but in 1935 a room was set aside and freshly painted for the new library.

During the war years - much of the school was prepared for possible bombing raids, like blackout blinds. Some teachers also went off to war.

1945 - a school branch of the Army cadets was formed with 86 boys enlisted.

1954 - the girl captain Margaret Buttell gave the welcoming speech to Queen Elizabeth on behalf of all the pupils in the area.

Post war era - Mrs Brissenden was know for her wonderful musicals and choir performances in the post war decade.

1956 - August 10 was the official opening of the new school in Lysaght Street, Fairy Meadow. Opened by Hon. R.J. Heffron, Minister for Education.

1957 - Wollongong High School moved to Lysaght street, Fairy Meadow. The new building is the older part of the current A block, consisting of 14 classrooms, 2 science laboratories, 2 science see rooms (now A9 & A21), a library (now the staff common room), a music room, and a combined hall-gymnasium. There was also a separate home science unit which was later demolished.

Late fifties - The choir frequently won the Wollongong eisteddfod, and appeared in the Sydney eisteddfods and on the ABC radio.

1962 - an official opening of the new front gates as a memorial to the late Frank Buckley and Reg Rowley, popular personalities at the school. Mr Rowley was the District Guidance Officer, and Mr Buckley was a Mathematics Master and Deputy.

1964 - an additional classroom wing was built at the end of A block. It is now the Art and Music wing.

1964 - The school had the delivery of their first black and white TV.

1966 - The Jubilee fountain was installed.

1971 - Hair has flourished, even some boy prefects have shoulder length hair and one had grown a moustache; Visit by Governor General Sir Paul Hasluck; Production: The Crucible.

1978 - Garage constructed for Driver Education and Mechanics. A car was provided by Boyded Holden – a Holden Gemini sedan. Ties no longer compulsory in Summer uniform. Last year of being a selective High School.

1984 - 1989 - Mr Doug Quiggin was the Principal from Term 2 1984. During this time the school ceased the usage of the cane as a punishment for boys. The school entered its first team in the Mock Trial competition.

1986 - Worst case of vandalism, most lower windows were smashed and a fire started. Musical production was “the Wizard of OZ’. Climax of this year was the celebration of our 70th birthday.

1988 - A concrete games court for PE was constructed at the edge of the sports fields.

1989 - After 1989 the school ceased to elect prefects instead encouraging an Student Representative Council.

Wollongong High School of the Performing Arts acknowledge the Wadi Wadi people of the Dharawal Nation, who are the Traditional Owners of the land on which we meet. We acknowledge the Elders, past, present and future, of this land as well as Elders of the wider Aboriginal and Torres Strait Islander communities. These Elders hold the traditions, the dreams, the hopes and the culture that has been kept alive for thousands of years. Our school lies between the sacred site of Mt Geera and the five islands which are significant figures in Dharawal dreaming stories. These stories pass on the traditions, practices and customs that have sustained the oldest living culture in the world to this day. In between the mountains and the sea we meet together in harmony and stand firm in the reminder that this land is, was, and always will be traditional Aboriginal land.

Copyright for this website is owned by the State of New South Wales through the Department of Education. For more information go to http://www.dec.nsw.gov.au/footer/copyright.